Many people suffer from respiratory problems nowadays. For example, asthma coughs, trouble breathing are just some instances that people face due to deteriorating air conditions. Hence, to counter this problem, many people have installed air purifiers in their homes and offices. 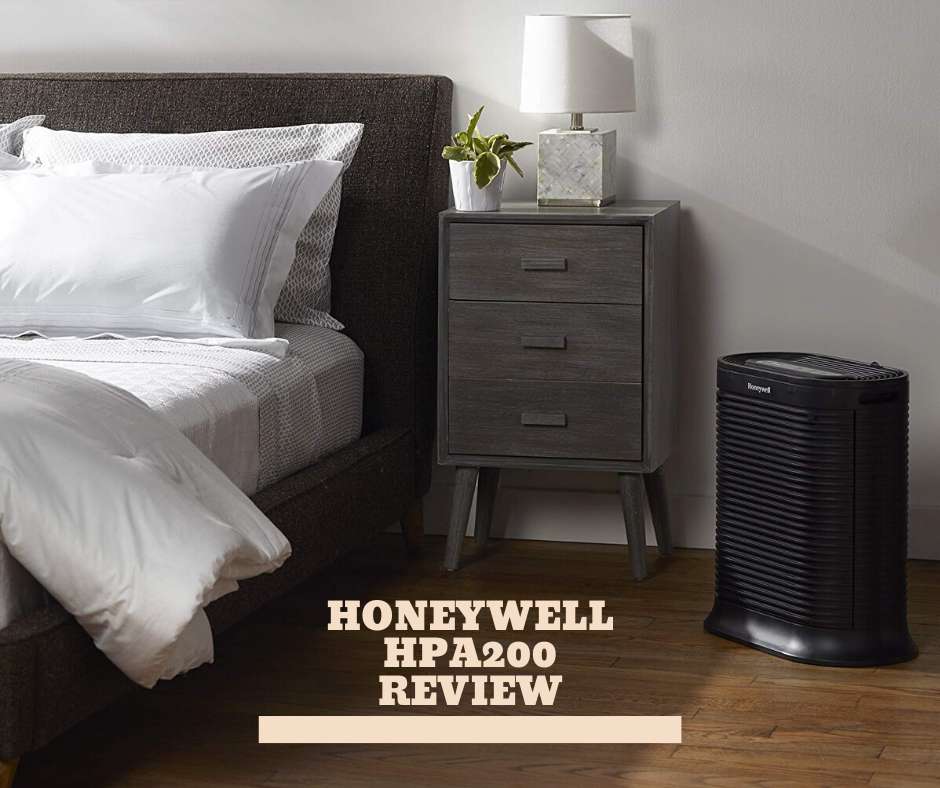 However, with so many options to choose from, which product is best for you? Well, not to worry. In this article, we bring you the Honeywell HPA200 Review.

A small and compact air purifier. You can use it both at home and in your office.

It purifies the air leaving it clean and, thus, preventing the development of allergies. Let’s check it out in more detail! 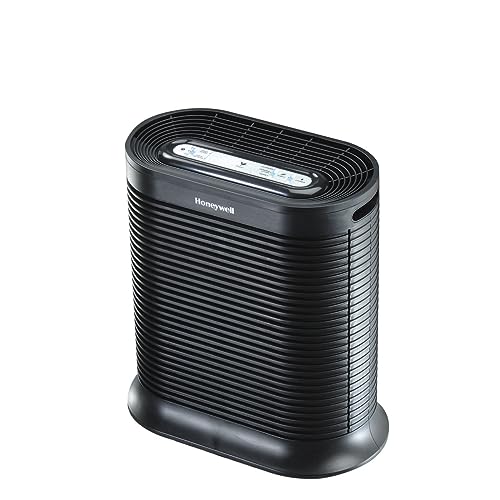 About The Honeywell HPA200 Air Purifier

The Honeywell HPA200 air purifier can capture 99.97 percent of the germs in rooms of up to 310 square feet. Moreover, it can also catch particles as small as 0.3 microns. For example, pollen, pet dander, dust, mold, and even ash particles from smoke.

Furthermore, the Honeywell air purifier also helps you sleep better. Thus, if you have allergies or live with a smoker, your sleep and breathing will no longer be disturbed. This unit will leave the air clean for you, thus preventing allergic reactions and making breathing easier.

Also, this air purifier purifies the air five times in an hour. Thus, you will know that you are sitting in a cleaner environment which is being refreshed five times every hour. Hence, this will also help you breathe better and remove dirt and germ particles from the air that you are breathing.

The Honeywell HPA200 air filter also comes equipped with HEPA filters. Consequently, making this product a certified use for cleaning the air in your offices and homes.

There’s more to the story… 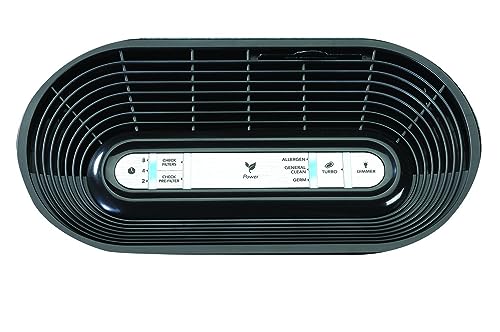 Let’s check out the main features of the Honeywell HPA200 air purifier.

There are two filtration stages to this particular air purifier. The first filter consists of the activated carbon. Hence, it functions by capturing smaller particles and deodorizing the air that you are breathing.

The particles include, for example, dust, fiber, pet hair, and such.

The second stage in the filter is the HEPA filters. They are known to capture 99.97 percent of the air particles. This stage can trap both small and large particles like bacteria, mold, pollen, and such.

Consequently, the two filter systems make for an effective cleaning of the air that you are breathing.

Lastly, this particular unit is not known to produce any harmful ozone emissions.

The Honeywell HPA200 comes equipped with two electronic filter checks. Hence, you will know when the pre-filter of activated carbon and the HEPA filter needs changing. The filters will thus need to be monitored closely to ensure efficient running of this air purifier.

Moreover, the filters may need to be changed often in order for them to function properly. Consequently, this feature will allow a schedule to be set for replacement. 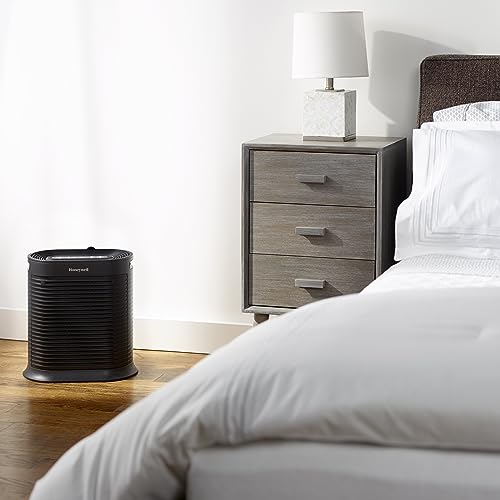 The Honeywell HPA200 air purifier has a cycle of purifying the air five times in an hour. Consequently, leaving the air fresh and breathable. Moreover, the unit features a CADR rating of 180 for pollen.

The allergen level can be used in seasons where allergic reactions are at their worst — for example, asthma during monsoon season.

Next, the general clean level is for everyday use. Thirdly, the germ level is most efficient during the flu season.

Fourthly, the turbo level is known for quickly leaving the air fresh and healthy for you to breathe in.

This particular unit comes with an automatic shut off timer. Consequently, you can set a time, and the machine will automatically shut off then. Thus, users can select from a duration of either 2 hours, 4 hours, or 8 hours.

Hence, according to your need, you can use the dimmer option.

The Honeywell HPA200 air purifier is compact in size. Hence, making it portable. Consequently, one can easily move it from one place to another.

Need it in your office? Or, do you want to move it from the lounge to your bedroom?

You need not worry. With the air purifier’s compact and small size, one can easily carry it from one place to another.

This particular unit features a sleek design. You can say the Honeywell HPA200 air purifier is a mixture of contemporary design with a modern touch. Thus, making this air purifier blend in well with its surroundings.

You can easily place this particular air purifier where ever you want. Moreover, the control panel is also located on the top. Consequently making it easy to operate this machine.

Also, the filters are easy to change.

Lastly, if you are in a hurry, the turbo level will quickly purify the air. Hence, you need not worry! 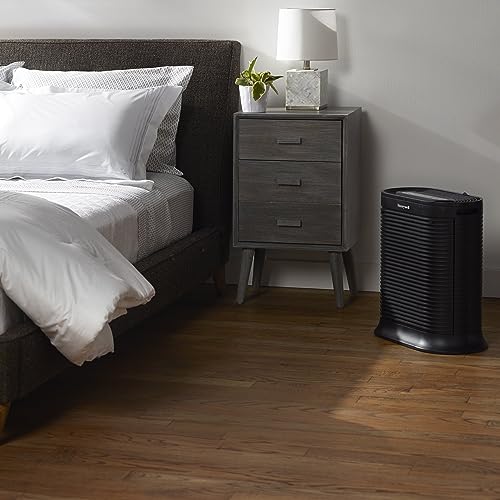 With so many added features to enjoy, what could go wrong? But, then again, there is always a downside to things as well.

However, we will look at the cons of this product later. Let us first compare the Honeywell HPA200 with similar products.

For example, the Honeywell HPA200 does not feature “smart” technology while the other is equipped with a Bluetooth feature.

Thus, depending upon your need, you will be selecting which Honeywell air purifier will suit your need the best. For example, some people might not need any of the three products compared above.

In fact, they could be looking for an even smaller version!

What Comes In The Box?

Hence, although the Honeywell HPA200 does have its drawbacks, the advantages far outweigh them.

Let us check out what the final verdict is on the Honeywell HPA200. Also, whether it is the winner of this round-up or not…

The clear winner of the, as can be seen, is the Honeywell air purifier for bigger rooms. However, the Honeywell HPA200 is not very far behind. It is for larger rooms.

Also, when looking at its functioning for larger rooms, this air purifier is not far behind in anything.

Moreover, it is on the same level as the Honeywell Bluetooth air purifier. The only thing it lacks is the smart Bluetooth technology. But then again, every model has a feature or two that the other does not have.

Thus, based on the Honeywell HPA200 review, we hope you make an informed decision. Happy Reading!